Here’s a compact, light weight tool for quickly opening clogged sinks, toilets and tubs. It handles rust, grease, sediment, and scale in lines up through 4″ in diameter.

The Kinetic Water Ram uses a burst of compressed air that drives a shock wave (kinetic energy) through water to break up stoppage. It’s particularly useful when the stoppage is on the far side of a drum trap or series of tight bends, since the shock wave can travel around bends without losing its force.

The Ram has a self-contained pump and pressure gauge, so you can hit the stoppage with just the right amount of force. You get instant impact with no build-up of pressure in the plumbing system. The force is transmitted through water, so it’s not affected by stacks or vents. 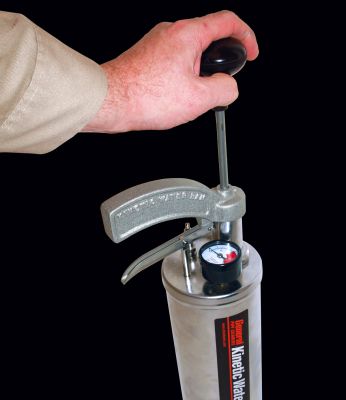 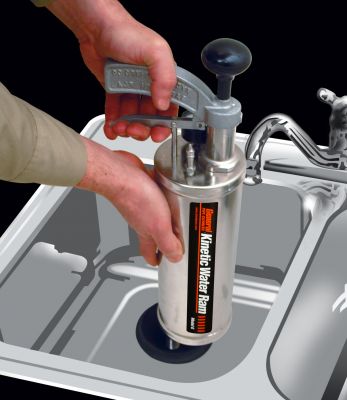 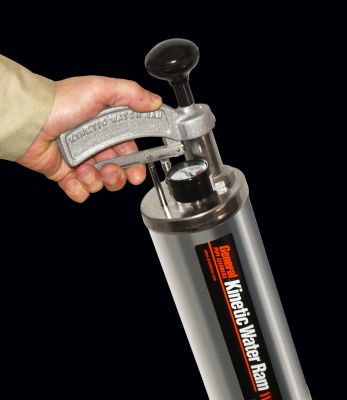 The Kinetic Water Ram uses a burst of compressed air, which strikes the column of water in a clogged pipe. The resulting shock wave, called Kinetic Energy, hits the stoppage at a speed of approximately 4,700 feet per second, quickly clearing the blockage and flushing waste particles away.

This slow motion video shows an example of how the principal of kinetic energy is applied. The instant impact protects pipes and joints because there is no build-up of pressure in the plumbing system. 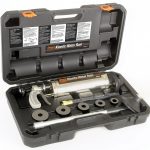 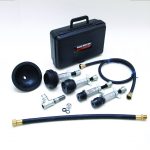 An optional toilet attachment (KR-CA) screws onto the front of the Ram and enables you to position the cone in the bowl to get a tighter seal. As a result, you can strike the blockage with greater impact without causing splash back. 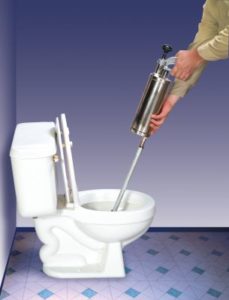