Drain cleaning professionals ignore new technology at their peril. As in most industries, if your competition has equipment that is better, faster, safer, and more professional, it puts you at a serious disadvantage. One need only look at the history of our industry in the past 30 years to see the truth in these statements.

What is the next big thing in our industry that you need to be paying attention to? Flexible-Shaft Technology! It’s like putting a weed-whacker down the drain, and you can use your camera system to give it pinpoint accuracy. 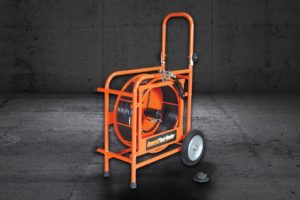 Several years ago, we noticed that plumbers engaged in pipe relining were using high speed Flexible-Shaft Technology to prep and mill their sewer lines. Flexible-Shaft machines utilize a swiftly rotating wire coil, much like a speedometer cable, inside a flexible hollow tube or hose.  A high speed motor is connected at the back end and a cutting device, often a carbide tipped chain, is attached at the front end. Because these cutters rotate at approximately 2,000 RPM, flexible-shaft machines are adept at milling, pipe prep and root removal.

When outfitted with the proper cutting tool, they leave the pipe in perfect condition to adhere to the material used in the pipe relining procedure. For this reason, they are used extensively in the pipe relining industry, and have also become popular with plumbers and drain cleaners whose only goal is to cut and remove root incursions.

One advantage that this technology has over snake style machines is that the outside tube or hose on the unit doesn’t rotate. This means that you can put the flexible-shaft machine and a pipe inspection push rod down the pipe at the same time, giving the contractor a real-time view of the action. This ability to give you pinpoint control over the cutting process is a game changer that can save you time and money!

The only major weakness reported by users of this technology is its inability to muscle through a tough clog. But, that was before the General Flexi-Rooter®!

The Flexi-Rooter is a game changer! It is a flexible-shaft device tough enough to open a stubbornly clogged drain, as well as performing as a pipe prep and milling machine.

General’s Flexi-Rooter is unique because it has a stronger and stiffer flexible shaft and outer sheath than competitive units, giving it the straight-line cutting power needed to open solidly clogged drains.

Plus, the Flexi-Rooter can wield General’s unique ClogChopper® as a forward cutting tool, giving it unparalleled flexibility and the power to cut through the toughest obstructions! 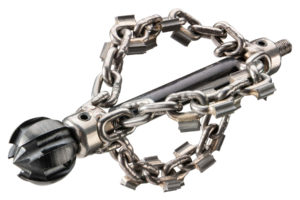 The Flexi-Rooter emerges as the clear favorite for contractors searching for the best way to fully utilize this new technology in the real world!

For more information, call the Drain Brains at 800-245-6200, or visit www.drainbrain.com/FlexiRooter.