That’s when they called Keith Johnson – and his “big artillery”.

Owner of Accurate Cesspool and a professional drain cleaner for over 25 years, Johnson forged a local reputation for swiftly and professionally tackling the area’s toughest jobs.

Years of accumulated grease, sediment and debris had accumulated in a back pitch part of the 8″ pipe.  Failure to employ routine, precautionary line cleaning had simply compounded the problem.

Johnson employed the Typhoon’s built-in VibraPulse® to help propel the jet down the line, around bends and to the clog.  “The VibraPulse really helped,” Johnson says. “And the Typhoon eventually blasted the blockage – making the whole apartment complex a bit better smelling!” 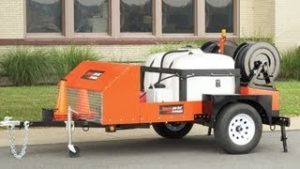 Johnson uses the Typhoon™ for a wide variety of jobs.

“It’s great for routine house trap maintenance cleaning,” he says. “The holding tank is also more than sufficient to clear the main and sewer lines of a dozen buildings in a work day.”

Two hose reels – a jet hose reel with 400 ft x 1/2″ capacity featuring electric rewind, and a water supply hose reel carrying 150 ft x 3/4″ hose – mount at the rear of the unit by the pressure gauge and output valve.  Engine controls and hour meter are positioned within easy reach in the lockable tool box with slide action doors below the reels.

Johnson likes the built-in brakes.  “You can drag a full load of water right to the job – and not waste time filling-up at the site,” he says. “And the antifreeze really helps in winter.  Competitive jets don’t have those features.”

“Maneuverability is great,” Johnson notes. “I can easily tow my Typhoon to jobs – and maneuver it around the landscaping of large residential and commercial buildings to problem areas.”

Johnson’s verdict?  “The Typhoon does what you want it to do – especially on demanding jobs!”

Click here for more information about the Typhoon trailer jet, or contact the Drain Brains® at General at 800-245-6200 or by email [email protected]